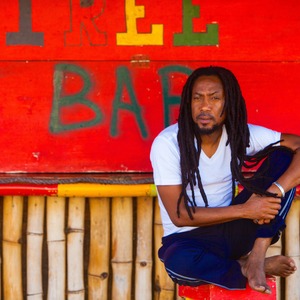 Who is Taj Weekes? One basic but incomplete answer is that Taj Weekes is a dreadlocked Rastafarian musician, bred in the Caribbean but shaped by intercontinental life experience. A more significant answer would be that he is a creative, poetic singer-songwriter who fronts a ...

dynamic reggae band named Adowa. And there’s an additional, highly significant answer, just as true as the first two. Taj is an unwavering, energetic humanitarian whose dedication extends beyond his song lyrics into his social activism, an activism that has culminated in his official role with the United Nations as "UNICEF Champion for Children" and his children's charity, They Often Cry Outreach (TOCO).

Aside from brains, a heart, and a great smile, he has four acclaimed albums of musically adventurous reggae. A fifth, “Love Herb & Reggae,” is arriving in 2016, to be supported by a year-long tour. Taj is remarkable too in that, although a formidable idealist, he nonetheless maintains an unblinking and sophisticated view of the world. This balance between seeing what is and seeking what should be clearly powers his social activism. It also imbues his songs with a pragmatic, non-judgmental optimism that is not merely unusual in reggae, but almost unique. So what makes Taj Weekes special can be summarized in three words: MUSICIAN. POET. HUMANITARIAN. What makes him astonishing is the easy and unforced harmony among all these facets of his existence.

Adowa, a disciplined team of talented musicians from differing cultures and with broad musical influences backs Taj Weekes live and on recordings. The name salutes the battle of Adowa in 1896, which ensured sovereignty for Ethiopia and proved crucial in the advancement of African independence and pride. Adowa's specific line-up alternates from time to time, but at a typical gig you might see a bassist from Dominica steeped in soca, a classically trained keyboardist with roots in Barbados, a Jamaican reggae stalwart on drums, a Trinidadian guitarist, and backup singers from yet another island. What’s consistent is that the eclectic styles and tastes of its members ensure a freshness and inventiveness to Adowa’s arrangements. The faces may change, but the excellent musicianship, and the vibe, remain.

Jatta Records is proud to announce the release date for Taj Weekes & Adowa’s much anticipated fifth album. Love Herb & Reggae is slated for release February 12, 2016 through VPAL, the distribution arm of VP Records. As a timely and even necessary update of the decades-old “sex, drugs and rock’n’roll” thinking, this powerful album expounds on social themes with a progressive approach that for many will be an abrupt, refreshing change from the kind of reggae they’re used to.

Yet roots reggae it definitely is, in its insinuating rhythms, sparkling arrangements and outstanding musicianship. Consider that almost since its incarnation, reggae has seemed intent on changing the world. Far too often, though, its more recent calls to action have been reactionary, obstructive and insular – so much so that “progressive roots reggae” has seemed an oxymoron. But now along comes Love Herb & Reggae to demolish any such expectations, pulling the whole scene forward with an openhearted, enlightened outlook. Nonetheless, the passionate call for a necessary revolution in society remains intact.

Singer-songwriter Taj Weekes explained how his commitment as a Rastafarian to a better world resulted in his most political album to date. “The Rasta philosophy helped shape me,” he said. “I’ve always spoken for what’s right, but in my songs I held back a bit. Now I want to shout it out for everyone to hear. No more Taj the person and Taj the musician – after all, they are one.”

Indeed, they are one. Weekes’ lyrics are a reliable reflection of his deep personal involvement as an activist within his community and well beyond. He has been honored with several distinguished humanitarian awards for his tireless work on behalf of children through his charity, They Often Cry Outreach (TOCO), and in his role as UNICEF Champion for Children in St. Lucia.

Not only is Love Herb & Reggae an advance for Weekes in his messaging, but as he explained, it represents a change in his creative process too. “For me this is very much a breakthrough. Previously I’d use a few chords, whatever sounded good, and sing over them; this time I carefully chose chords that not only fit the melody but would support the words. I jump from major to minor wherever necessary to get what I really want.” A similarly exacting process has clearly gone into the musical arrangements as well, with more musicians playing more varied instruments than ever before. The result is a full and satisfying sound.

A socially progressive, loosely conceptual album in answer to the “sex, drugs and rock’n’roll” mantra. This is roots reggae of a unique breed. Here is a track-by-track outline:

1.Let Your Voice: A persuasive argument against passivity, plus the album’s first reference to revolution. The stage is set.

2. Life in the Red: “Traded my day for convenience of life; slave I’ve become…” Fervently expressed warning of consumerism, musically complete with keyboards and sound effects.

4. Giant Beast: An original take on reggae’s well-known and justifiable opinion of “Babylon” and why it must eventually fall.

5. Here I Stand: A musically adventurous way to deliver a devastating condemnation of homophobia. The album’s most direct appeal for love, love, love…

6. Love Herb & Reggae: “Put a rhythm to a poor man’s cry” – a Nyabinghi rhythm in this case. “Herb for my mind, music for my soul, love the only law to rule the world.”

7. Bullet from a Gun: Demonstrates the potency of an unhurried but thorough denunciation of gun violence without explicitly assigning blame. Effectively supported by pleading background vocals.

8. Mediocrity: Takes the premise of “Let Your Voice” several steps further by reference to the musician’s own voice. “I won’t make peace with mediocrity.”

9. Rebels to the Street: The revolution theme made explicit. “So brace yourself.”

11. Was It You: A pure love song. “You brought me a rainbow and painted my sky.”

12. Here I Stand: A militaristic march beat powers this very different arrangement of Track 5. The martial rhythm relents at the bridge just in time for the lyric’s insistent plea for love.

13. Rebel: An acoustic, almost prayerful version of the group’s track (“Against the Machine”) on the 2012 various artists release Occupy This Album.  It’s an entreaty to listen to the “muted voices” of the masses, all the more powerful because understated.

14. St. Lucia on My Mind: A love song to a homeland. Impossible to resist, especially “in the middle of a cold winter.” Thus the album concludes with a broad musical smile.